This article isn’t the same as I’ve written previously. I won’t provide the configuration of routers comparing syntax at Cisco IOS XR and Nokia (Alcatel-Lucent) SR OS. Instead I’ll review the hardware architecture of service provider routers and how mentioned vendors call their parts. As you can imagine their architectures are the same.

I won’t compare performance, prices or feature set. I have neither possibility nor desire to do it. Prices are always subject for commercial negotiation and may significantly differ from global price list (GPL). Performance is very specific issue, because measurements must be done in certain conditions, which are far way from white papers. These conditions always depend on each providers network and its traffic pattern. It’s possible to make measurements for Internet traffic mix (IMIX), but it also may be far away from reality if we have pure mobile operator network. Feature set isn’t interesting for me right now, because I don’t fill in bidding documentation for tender.

What I will do, I’ll explain the architecture of the typical modular service provider router, its components and main operation principles, because they are the same. This information will be valuable, when you read documentation or speak to engineers, who have experience with another vendor.

Typically service provider router has modular architecture, if we are speaking about aggregation nodes (AN), provider edge (PE) or provider core (P) routers. In Nokia (Alcatel-Lucent) we have SAR 7705, SR 7750 and XRS 7950 routers. In Cisco we have ASR 9000, NCS 6000 and CRS-1/3. There are also numerous other models, but they in general have the same architecture, if they are modular. Just take a look at Nokia SR 7750 12e and Cisco ASR 9910 routers. Find 10 differences: 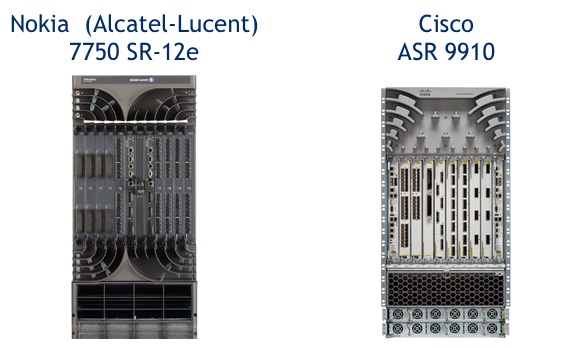 Each modular router can be presented with the following image: 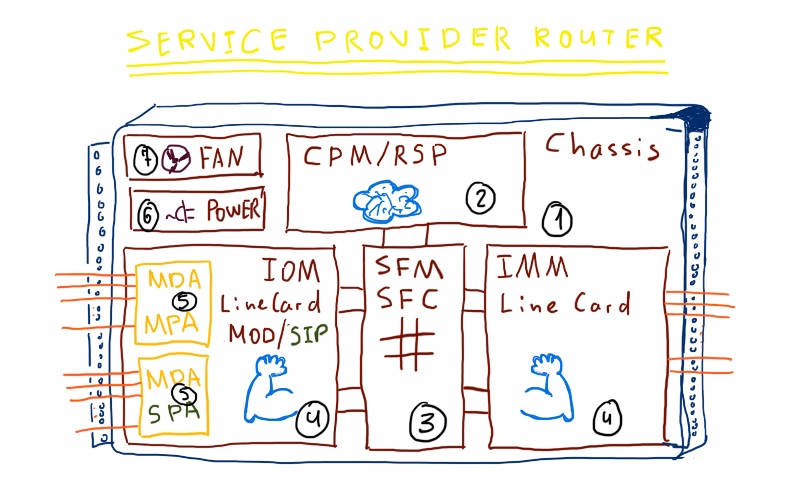 Let’s review what each component does:

There are also some additional components that are highly desirable usually (and that must be purchased separately), like rack mount kit or cable organizer.

Though in general there is more or less parity between modules, each vendor has its own specific module, which another doesn’t have (or least I haven’t found them). As an example, Cisco ASR has Virtualized Service Module (VSM), which allows you to run virtual machines (VM) directly at router for any your purpose. Nokia (Alcatel-Lucent) routers has specific line card called Integrated Service Module – Mobile Gateway (ISM-MG) for processing mobile traffic from 2G/3G/4G and Wi-Fi.

Besides big monstrous modular routers there are also small fixed service provider routers that have fixed configuration and all components being integrated. They are usually used as cell-site gateway (CSG) or customer premises equipment (CPE). For example we have Nokia (Alcatel-Lucent) SAR 7705 portfolio, which has the smallest 1RU (rack unit) routers with fixed number and type of interfaces. In Cisco we have ASR 901 or 920 Series routers, which follows the same 1RU fixed ports architecture.

Review of the actual data sheets has provided many interesting information about current modules and interoperability. Not all new line cards are supported with old CPM/RSP and vice versa. When you configure router you should always take care about such possible problems and check the modules interoperability before buying something.

Knowing the vocabulary is necessary for successful operation. When I met the Nokia (Alcatel-Lucent) SR 7750 description, I was confused by this IMM/IOM and so on, as with Cisco I used only “line card” term. I hope that this article will help you to understand, what network guys at presentations talking about.

Insights from “The Deadline” by Tom DeMarco

Anton KarneliukProject managementJuly 22, 2016
Hello my friend, Recently I’ve found in Internet an interesting book, which description has intrigued me a lot. The book …
END_OF_DOCUMENT_TOKEN_TO_BE_REPLACED

Anton KarneliukProject managementAugust 12, 2016
Hello my friend, In this blogpost I’ll talk a little bit about particular importance of lessons learned during the project. …
END_OF_DOCUMENT_TOKEN_TO_BE_REPLACED

HS. Part 3. Working out graphs capabilities for the network modelling.

Anton KarneliukNetworkingApril 20, 2020
Hello my friend, There was quite a considerable amount of the feedbacks on the previous post about the data centre …
END_OF_DOCUMENT_TOKEN_TO_BE_REPLACED

Anton KarneliukGeneralJune 5, 2017
Hello my friend, A year ago, on 5. June 2016 I’ve posted my first article about joint operation about Nokia …
END_OF_DOCUMENT_TOKEN_TO_BE_REPLACED