MPLS L3VPN is the most widely used service in the whole family of MPLS services. As it’s the most widely used, it’s also the clear and straightforward for the most part of network engineers. IPv4 VPN is covered in RFC 4364, and IPv6 VPN is covered in RFC4659.
From the high level prospective this service consist of BGP signaling (AFI/SAFI 1/128 for IPv4 and 2/128 for IPv6) and MPLS data plane. From the signaling point of view, we have the same attributes Route-Distinguisher (RD) and Route-Target (RT), what we have used in all type of BGP-based services (like VPWS or VPLS) previously. RTs should be the same across all PEs that participate in this VPN, whereas RD may be or may be not the same. Personally I prefer to use different RD for each and every PE/VRF because it adds possibility to have multipathing and load sharing in BGP/MPLS IP VPN. The disadvantage of such approach is higher memory utilization, so you must take care about this difference during deployment.

The good news is that here we can test data plane at Cisco IOS XRv now. You remember, we had the problem with data plane for L2 services (including L2 VPNs) at Cisco IOS XR in previous labs. Now this problem doesn’t bother us and we can perform all tests end-to-end between Nokia (Alcatel-Lucent) VSR (SR 77500) and Cisco IOS XR (ASR 9000).
The next point, which we are going to test, is operation of classical IP VPN for IPv4 and IP VPN for IPv6 that is called often 6VPE.

Physical topology remains the same for more than 10 labs already: 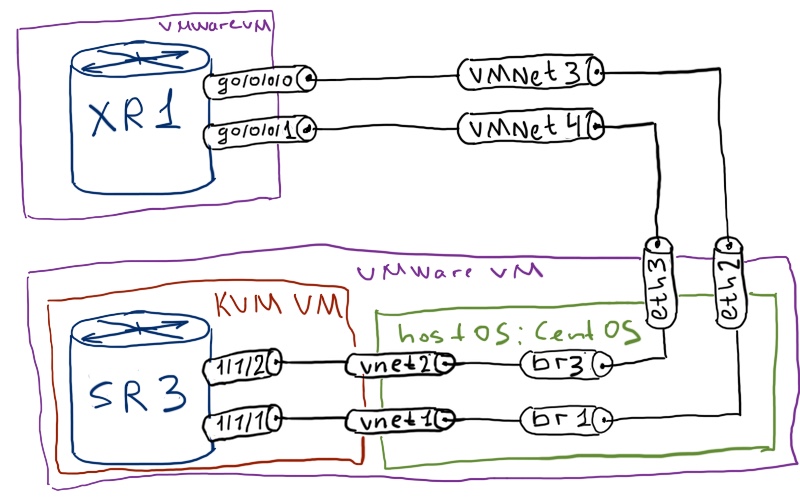 The logical topology is a little bit new. From the real world point of view, it makes no sense as we have single point of failure (SPOF) that is SR2. But we can imagine that there are two paths, which go through different P: 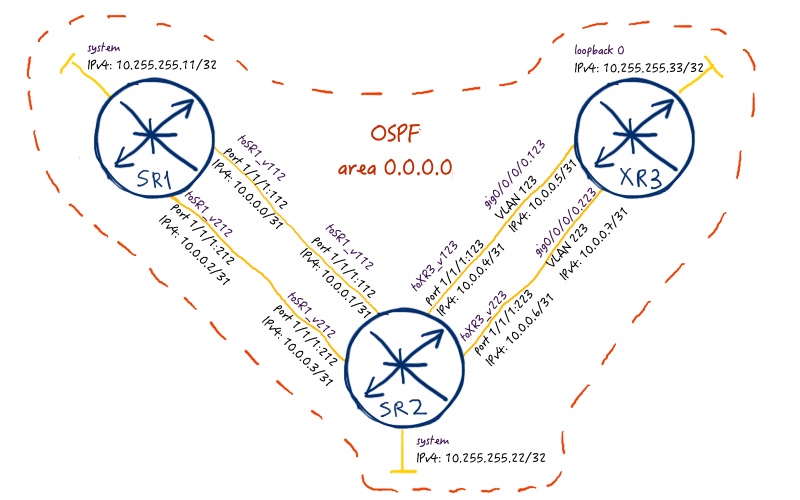 As IGP we use OSPF in our lab. For sure you can use ISIS, it’s up to you. But we have used ISIS previously in L2VPN’s labs, so this time I’m gonna using OSPF. For MPLS forwarding plane we will use MPLS LSPs built by RSVP-TE. There will be two tunnels in each direction for load balancing purposes.
Initial configuration for the lab is in the following files: linux_initial xr3_initial sr2_initial sr1_initial 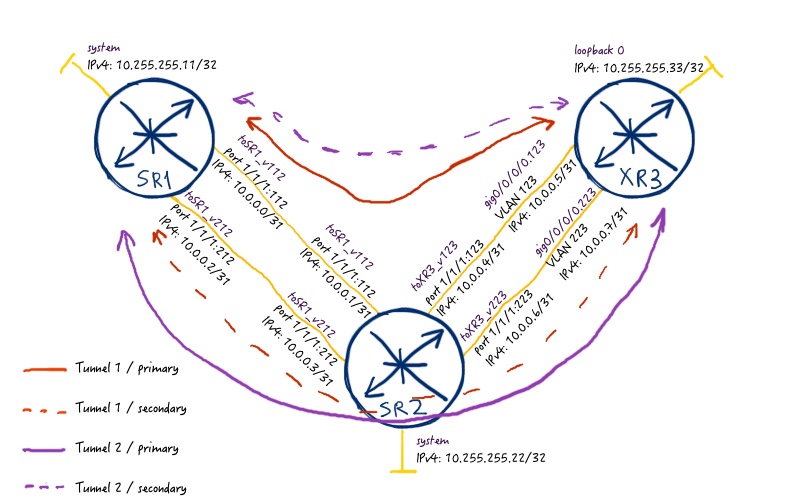 So we have to two tunnels in each direction between PE routers. They are built in the following ways:

The configuration is done only at PE routers:

Let’s briefly check our MPLS LSPs. In Nokia (Alcatel-Lucent) SR OS you should check first of all so called “tunnel-table”, what is the essence of all MPLS LSPs configured at your device:

We see that metric for both LSPs are the same, so they can load balance the traffic then. At Cisco IOS XR you see both LSPs in RIB:

So we see that our MPLS tunnels are up and running and we can go further to the configuration of BGP/MPLS IP VPN itself.

For more details regarding LSP check refer to the MPLS/RSVP-TE article (link).

Now we have approached the core topic of the article that is configuration of the VPN itself. The service map for our article is the following: 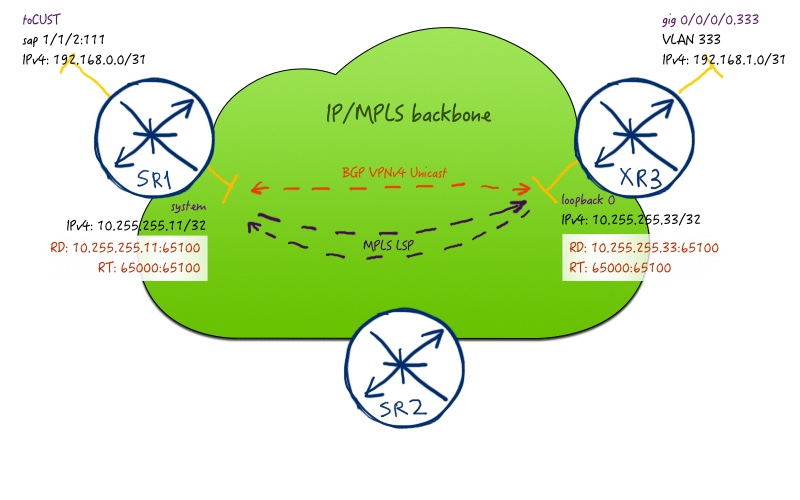 The configuration of VPN is necessary only at PE side, so we configure only SR1 and XR3:

Both in Nokia (Alcatel-Lucent) SR OS and Cisco IOS XR we create first of all BGP peering for the address family VPNV4 (AFI/SAFI 1/128), because it’s basis for our IP VPN service. Then in Nokia (Alcatel-Lucent) SR OS we configure client’s port in access mode in order to be able to create SAP in VRF. Afterwards we create service VPRN 65100 (actually, VRF), where we configure corresponding route-distinguisher (RD) and route-target (RT), as well as interface to customer and customer’s BGP process.

In Cisco IOS XR we configure VRF and RTs in the global configuration context. Then we configure customer’s interface and associate it with VRF. The last step is the configuration of the BGP for this VRF including RD inside global BGP context.

If the logging is enabled, you will see in CLI the following messages, which inform you that BGP peering is built:

As we don’t announce any routes still, we won’t see any prefixes in VRFs/VPRNs. We could announce interconnect prefixes, but usually it isn’t necessary in real deployment, so we don’t do it. What is possible to check at this stage is the peering of BGP in the corresponding address-family. From Nokia (Alcatel-Lucent) SR OS you do it as follows:

In Cisco IOS XR you issue the following command:

It is also worth to check the router-distinguishers and route-targets associated with VPRN/VRF as this ensures you will have correct import/export of routes, when they will be announced. Here is the example from Nokia (Alcatel-Lucent) VSR (SR 7750):

At Cisco IOS XRv (ASR 9000) you would use the following commands:

Let’s add the life to our networks in terms of customer. Here is the topology of BGP/MPLS IP VPN service from the customer point of view:

We are going to emulate customers using two VPRN instances at SR2.

Here you can find the final configuration files:

At customer routers (VPRN 11 and 22) we just configure local attached interface (emulated by loopback) that is announced via BGP. Remember that we have to configure explicit export policy in Nokia (Alcatel-Lucent) SR OS in BGP in order to announce any route. If you don’t configure them, no single prefix will be advertised. You see that configuration at VPRN 11 and 22 is almost identical.

In order to bring VPRN up you need to define route-distinguisher inside VPRN even in VRF-lite scenario in Nokia (Alcatel-Lucent) SR OS.

At our PE routers we just add specific route policies and BGP peering to the customer. In Nokia (Alcatel-Lucent) SR OS we add policy that allows redistribution of routes learned from MP-BGP to BGP session to customer. In Cisco IOS XR we need policy to allow advertisement routes to eBGP neighbor (by default Cisco IOS XR doesn’t send any routes to eBGP peers). Receiving policy isn’t obligation, but it should be configured as well.

Now we can check routing table at all our devices related to this particular BGP/MPLS IP VPN service. Let’s start with VPRN 11 (SR2) as first CE:

The next device in the flow (regarding to the provided image above) is the first PE that is SR1:

Then comes the second PE XR3:

And finally we comes to the second CE routers, which we have at VPRN 22 (SR2):

We see that our client’s prefixes from site A and B are installed in all corresponding routing tables along the path. At Nokia (Alcatel-Lucent) VSR SR2 that is one of the PEs you see that prefixes from Site B is available through MPLS LSP build by RSVP-TE. At Cisco IOS XRv XR3 that is another PE you see that prefix from Site A is known via BGP and is available through next hop in default routing table.

The next step is to check which service labels BGP has signaled for this VPN. In Nokia (Alcatel-Lucent) we have to issue two commands to check it:

In Cisco IOS XR you just issue one command and that’s it:

You might spot that though we haven’t announces explicitly interconnect prefix between SR1 and VPRN 11 at SR2, we see it in BGP RIB at opposite router. This is the default behavior of Nokia (Alcatel-Lucent) SR OS, so you have to care of it.

Now it’s time to make some tests. Let’s perform ping from Customer’s Site A subnet to Site B subnet:

Here what shows us Wireshark at the path:

On the forward path from VPRN 11 to VPRN 22 you see PHP operation that is default for Cisco IOS XR (and other Cisco operation system). This PHP means that SR2 pops the transport label and sends the packet only with service label to XR3. In Nokia (Alcatel-Lucent) SR OS we don’t have such default behavior, so you see transport labels at both hops in MPLS core.

For more information about PHP and it’s configuration in Nokia (Alcatel-Lucent) SR OS and Cisco IOS XR refer to the corresponding article.

So far, so good. We have successfully implemented IP VPN service for IPv4 and we are going to do the same for IPv6. Such implementation is also often called 6VPE. Take a look at the image of the service:

We won’t split configuration part for customer and core part here and will configure everything simultaneously. We use the same links for CE-PE peering, so there is no necessity to make additional configuration at linux:

In SR1 we don’t configure and apply new route-policy as it’s already attached during configuration of IPv4 part.

At PE routers we add vpnv6 unicast address-family at the peering between SR1 and XR3. Pay attention that in Nokia (Alcatel-Lucent) SR OS you have to mention all previous address families if you want to retain them, otherwise they will be deleted. In Cisco IOS XR you just configure new entity inside neighbor context. We also add IPv6 addresses at interfaces and configure BGP peering inside VRF/VPRN to IPv6 CE. In Cisco IOS XR we also add support of IPv6 unicast address family to VRF. In Nokia (Alcatel-Lucent) SR OS it’s done automatically.

As we have built two separate BGP sessions, we see both of them in “BGP summary”. In the route table you see that next hop for site B prefix is resolved to global unicast address (actually, site scope) prefix.

At Cisco IOS XRv PE that is our XR3 we see the same information but displayed in the different way:

We see advertised and received prefixes for both address families. Actually their amount is the same as we configure the same policies. I guess you might be interesting in what we see in the routing table and BGP RIB:

The next hop of the routes known from SR1 is “::ffff:10.255.255.11” and learned from default vrf. This is form of IPv4 address that you will always see, when IPv6 route is available over MPLS VPN.

Finally we check the routing table at VPRN 22 (SR2 CE):

So far we have made a brief review of our tables and now we’ll perform the same ping test as we’ve done previously but this time for IPv6:

Wireshark shows us almost the same picture as above:

The only difference you might spot is that Cisco IOS XR allocates separate labels for IPv4 and IPv6 prefixes, whereas Nokia (Alcatel-Lucent) SR OS creates just one label for all prefixes associates with particular VPRN by default.

During configuration of this lab I’ve faced very strange behavior of Nokia (Alcatel-Lucent) VSR, when newly configured BGP processes in VPRNs 11 and 22 weren’t sending any BGP packets so BGP peering with PE wasn’t established. I’ve tried to make some reconfiguration but there was no success. Then I’ve restarted that VSR and everything started working as proper. As Germanys say “Reboot tut gut”, what means in English “reboot makes good”.

Comparing to the MPLS L2VPN services, configuration of MPLS L3 VPN (BGP/MPLS IP VPN) is much simpler and shorter. Basically you need only route distinguishers and route targets, which were necessary in all BGP-based L2 VPN services as well. All features, which we have reviewed from the beginning of our journey into joint operation of Nokia (Alcatel-Lucent) SR OS / Cisco IOS XR world, allows us to build middle-size network for service provider. In the next articles we’ll discover some advanced features that help you to build high scalable network. Take care and good bye!

Anton KarneliukNetworkingNovember 11, 2016
Hello my friend, Today we’ll review implementation of the most advanced, scalable, flexible (and the most complex) L2VPN that exists …
END_OF_DOCUMENT_TOKEN_TO_BE_REPLACED 13

Anton KarneliukNetworkingMay 11, 2020
Hello my friend, Some time ago we have covered in-depth OpenConfig with NETCONF configuration as well as the OpenConfig telemetry …
END_OF_DOCUMENT_TOKEN_TO_BE_REPLACED

Anton KarneliukVideoJuly 8, 2019
Hello my friend, In the era when Internet plays more and more crucial role in the global business, the security …
END_OF_DOCUMENT_TOKEN_TO_BE_REPLACED