we continue the series of the blogpost dedicated to the overview of the Nokia SR Linux. Today we will speak about the interoperability and its joint operation with Microsoft Azure SONiC, another disaggregated OS, which is used in the hyper scale data centres.

The data centres and applications they host might be very static, if that is classical enterprise workloads. However, in the world of the clouds the frequency of the changes performed in the data centre network and servers can be very high. Effectively, it can be so high that doing them manually is impractical. 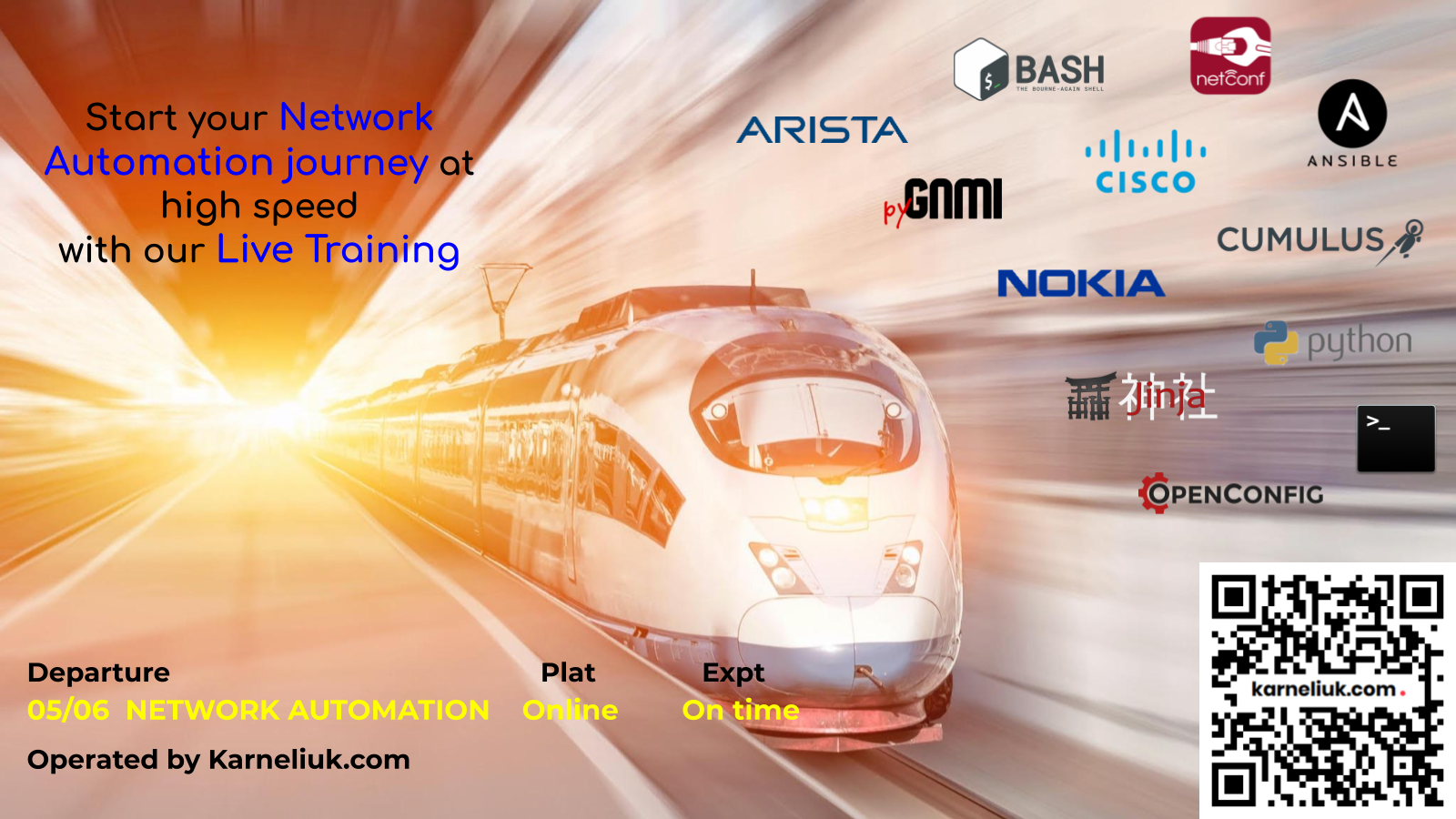 At our network automation training (either live or self-paced) you will learn the foundation of the automation for the small and big data centres, and clouds. You will lean how to structure the data using YANG modules, how to serialise it using JSON, XML, Protobuf depending on the application requirements and how to manage the fleet of your IT and network workloads using gRPC, gNMI, NETCONF, REST API and many others.

The interoperability of the technologies, or the same technology across different vendors is a paramount factor for build the complex IT systems, and there are no doubts that the data centres, especially hyper scale data centres, are the complex IT systems. The interoperability is a broad term; hence, for the purpose of this blogpost we’ll specify it as follows:

Yet in this article we don’t speak about the integration of the Nokia SR Linux container in the Data Centre Graph. We’ll do that at a later stage.

BGP is a de-facto standard for building hyper scale data centres; hence, it is a starting point for the interoperability overview. On the other hand, especially when we talk about the application design in the hyper scale data centres, there is no need to run any sort of the overlay at the network level, because the parts of the applications communicates between each other using IP addresses. That simplifies the data centre design making the pure IP/BGP fabric sufficient. In the same time, it doesn’t exclude the possibility to deploy the overlays on the host level, where the tenants networks can be spanning multiple hosts, like in case of OpenStack or Docker clouds. Hence, BGP interoperability is a key

Both the Nokia SR Linux and Microsoft Azure SONiC are available as Docker containers, what allows the network and automation developers to test various designs and configuration quickly and efficiently. As such, in this lab we will focus on :

As we aren’t focusing on the automation yet, we are interested in the SW versions of the network functions:

In the beginning the topology is pretty small:

Graph is generated the Data Centre Network Graph. Integration of the Nokia SRLinux to it will be covered later.

The further details are as follows:

You can take a look at the code in our GitHub repository.

The overall structure of the of interoperability lab consist from the following steps:

Let’s start with that

As promised in the previous blogpost, we will share how to build the connectivity between the containers. In fact, we will use the approach described earlier, when we just started our researches with Microsoft Azure SONiC. The approach is the following:

In the previous approach we were terminating the connectivity between containers on the Linux bridges. However, that is not the case anymore. We have moved to CentOS 8, where the bridge tool (brctl) is missing. It doesn’t mean that we can’t do it, if we want to, but we will have to rely on the network manager daemon.

Learn more about installation and management of Linux CentOS 8 at our network automation training.

To build the topology we are using the simple Bash script, which we will cover in depth now. This script will assure the topology is build accurately.

Hello to everyone who thinks that Bash is dead. It is not and it is keep walking.

With this part we create the Docker containers with our network functions:

In this simple example we have predefined earlier, what network elements run which network operating system. That’s why the provided for-loop with if-conditional matching the hostnames is absolutely OK. Later, once we will integrate it in the Data Centre Network Graph with Python, we will add the automated topology generation capabilities on other attributes.

Once the Docker containers with network elements are launched, you can interconnect them.

The final steps are related to the configuration of the customer endpoints (Ubuntu hosts) and tweak of the Linux firewall (iptables):

Once the script, which builds the lab is clear, we can execute it to boot the lab:

At this point the network emulation is build, we have 6 containers up and running and 6 Linux network namespaces:

As such, we can go further to the configuration and verification how it will work.

In the previous blogpost we have taken a look on the configuration of the Nokia SRLinux over CLI. So today we will analyse the configuration file, which is stored at our automation host in case of usage of the Docker container:

The configuration file is called config.json, and as you can figure out from its name, it is a JSON file. In case of our lab topology, it has the following structure:

The SR Linux is a brand-new network operating system. As such, Nokia has taken an approach of creating a model-driven configuration from the day zero, pretty much what they do in Nokia SR OS for a couple of years now. As you can see, each configuration context starts with “module_name:top_level_container”, which as a JSON serialisation of the YANG-formatted data.

Come to our network automation training to learn about YANG data modules, how to read them and how to create your own, as well as to deal with JSON.

If you are familiar with OpenConfig, you can figure out that all the Nokia SRLinux YANG modules effectively are very similar to OpenConfig YANG.

In the previous part you might have seen that this configuration file is mapped to the file inside the Docker container with Nokia SRLinux. From the management perspective, having this file during the container is off is very convenient, as you can modify it as you need, assuming you know the YANG modules, and boot the node directly with the proper configuration.

To review the operational data, we need to connect to the device via SSH:

Let’s take a look, what do we see in terms of the configuration of the interfaces at leaf11:

Once the interfaces’ verification is done, you can check if the routing context is up and running:

Afterwards, it makes sense to check the list of the BGP neighbours and their states However, this time we will check the operational data using the YANG module. Nokia SRLinux gives you opportunity to see it in the CLI directly:

This snippet gives you idea, what you should expect upon collecting info using gRPC/gNMI.

And finally the routing table:

Which is also available in YANG modules:

So far you have seen that BGP is up, mean that the interoperability is already there. Nevertheless, let’s take a look on another hyper scaler network operating system.

As such, we outline here only the most relevant pieces. The configuration of the Microsoft Azure SONiC is also stored within a JSON file, which is available whereas the container is down:

Once the Docker container with Microsoft Azure SONiC is up and running, we can verify the interfaces using the standard Linux commands:

Learn the Linux networking and key commands to control it at our network automation training.

The BGP status is available via the Quagga CLI:

And the routing table using the Linux commands again:

Per the documentation we’ve managed to found, the Microsoft Azure SONiC supports YANG-based management. However, the modules shall be developed. It also supports the streaming telemetry.

This is the easiest exercise, to be honest, following our topology we just need to ping the IP address of the host12 from the host11:

That effectively concludes the lab:

This article is part of the Hyper Scale Data Centre (hs-dc) series, which has its own GitHub repository.

The core complexity was about the building the Linux networking between the containers. Despite we have it already done earlier, we have reworked them again to simplify the topology and reduce the amount of the interfaces omitting the brctl and adapting topology to CentOS 8. Finally the Bash script with the lab launch looks smoother and easier to read.

Having the configuration files as JSON files creates a good opportunities for the automation, it is very easy to create a JSON files using Python out of Python data structures. That’s very valuable both in case of the lab, where the configuration can be prepared in advance of the topology build allowing the network to get directly into the desired state, and in case of the production network, where you can distribute the full configuration file assuring there are no hand-made artefacts. Nokia SR Linux supports the YANG modules out of the box, whereas SONiC requires them to be developed. The tests on the gRPC/gNMI joint operation and telemetry will be done in an upcoming articles. Take care and good bye.

Anton KarneliukCode EXpress (CEX)July 21, 2020
Hello my friend, In the previous blogpost we have shared how some thoughts how you can parse the CSV file …
END_OF_DOCUMENT_TOKEN_TO_BE_REPLACED

Anton KarneliukGeneralJune 8, 2018
Hello my friend, Two years, on 5. June 2016 I have posted the first article on the topic of interoperability …
END_OF_DOCUMENT_TOKEN_TO_BE_REPLACED

Anton KarneliukNetworkingMay 18, 2020
Hello my friend, In the previous blogpost we started the discussion about the gNMI/Protobof approach to network automation by creating …
END_OF_DOCUMENT_TOKEN_TO_BE_REPLACED

Anton KarneliukNetworkingNovember 5, 2020
Hello my friend, as you know, Ansible is one of the leading tools for the automation of the IT and …
END_OF_DOCUMENT_TOKEN_TO_BE_REPLACED