In the vast majority of cases we speak about the network, network devices and network configuration. Which is absolutely legitimate, as we write about the networks. However, sometimes exactly the same network technologies live in the server world and do the same things under different names. So today we’ll take a look how to create the high-available server cluster using the Keepalived.

Servers are perfect for automation

In the same time, the tools and approaches you learn at our network automation training are universal: they are applicable both for the network and servers automation. Automate all things! 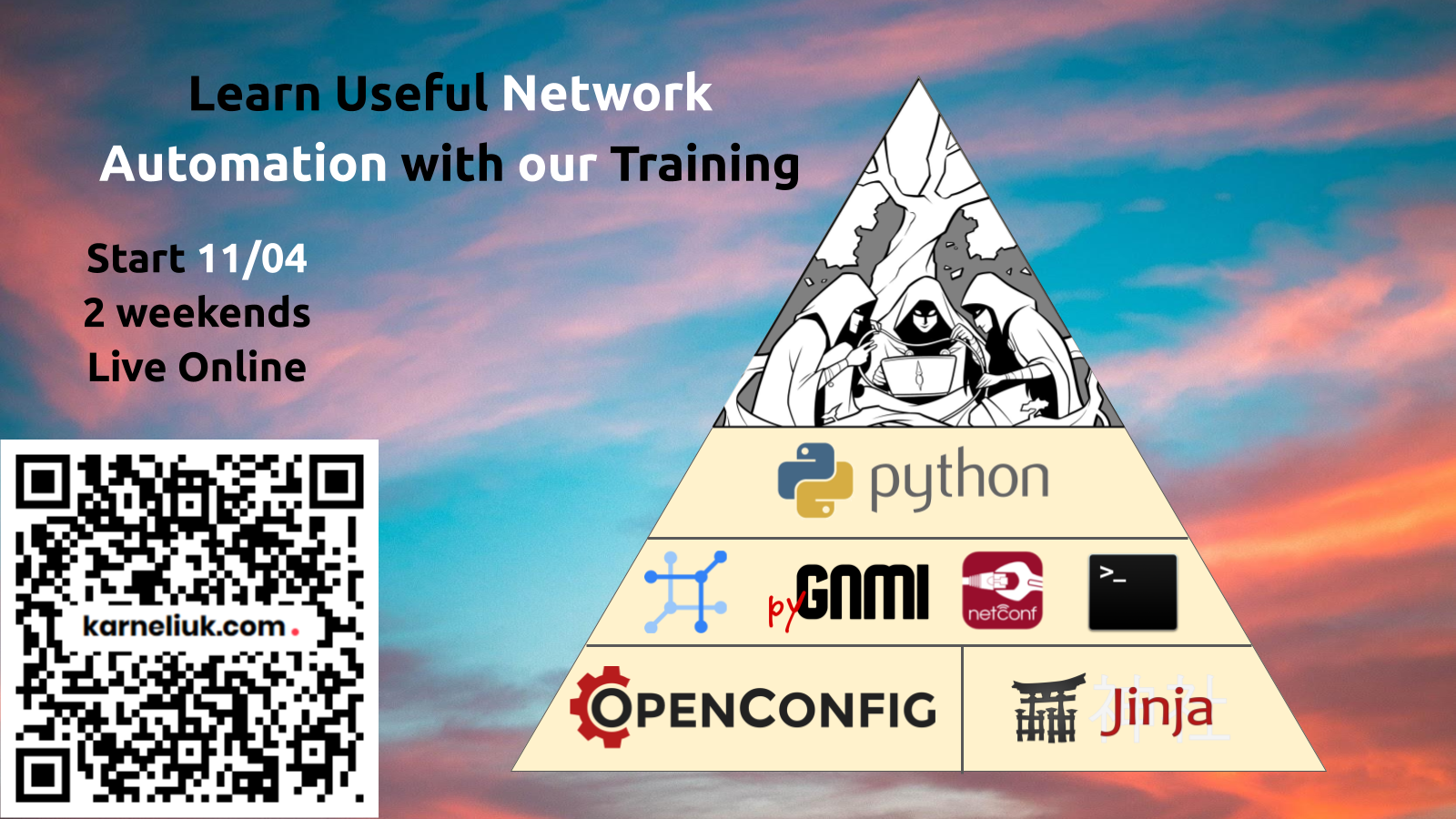 At our network automation training we explore the Linux setup and administration so that you can build your Linux-based lab and manage such applications as KVM and Docker in addition to the Linux bridges and other types of networking. That is a very important part of the training and pleasant addition to the detailed overview and hands-on experience with NETCONF/RESTCONF/GNMI with YANG, JSON/XML/YAML/Protobuf and Python/Ansible/Bash in the context of the managing your network devices from Cisco, Nokia, Arista, and Cumulus.

The high-availability is without doubts one of the corner stones of the modern applications. With more and more mission critical business process from financial reporting and forecasting to online purchase of everything to tele-operated surgery, there is no room for the application to be down. It requires the redundancy on multiple levels including the infrastructure. At the network level, the whole series about the Data Centre networking covers different scenarios of the network build including the fast reroute, CLOS topologies and so on. That’s why today we want to talk a bit about servers.

By no mean we pretend to cover all the aspects of the resilient infrastructure on servers side with this blogpost. Instead, it is just the first step in that direction.

The one of the protocols we’ve recently encountered during build of the servers cluster is called Keeplived. For those, who works on the server side, it is not new at all, as it exists already for a while. However, for us, networking folks, it was quite and interesting discovery. The Keeplaived has three main components:

In today’s blogpost we’ll focus on the VRRP piece.

In this setup we are using the following topology. The network part is not particularly important here, as we are focusing on the servers and their configuration:

If you are interested in the multivendor data centre implementation and interoperability, read the corresponding series.

Here you will learn how to install and configure the KeepaliveD and some other Linux components to allow it working.

First of all, you need to install the keeplaived at your Linux. You can do that in any Linux distribution. We using the CentOS 8 in this lab. Unfortunately, given the latest news from Red Hat and IBM, the CentOS 8 is now being discounted. However, CentOS 7 will still be around till 2024, so you still can use it in your projects

Come to our network automation training to learn more about Linux.

Once the application is installed, you can validate that:

As you can see, by default the application is not enabled. We will do that once we will put the proper configuration in place.

The process of the configuration is relatively straightforward, if you are familiar with Linux:

If you are familiar with the VRRP configuration on the routers, this snippet is self-explanatory. However, if you are not, it could cause some questions. Here are the details:

This tools has quite good documentation, which you can use to implement this (or any further) use case.

The backup host shall have the following configuration:

Once the configuration is complete, you need to start the the keepalived.service on your Linux hosts:

Once this configuration is complete, there is one more thing we need to do: change the built-in Linux firewall (iptabels in our case) configuration to allow the communication for the VRRP.

By default the Linux security rules are quite restrictive. As such you need to allow the traffic from the adjacent servers for the VRRP; otherwise, it will be dropped. To do that you should add the following rules:

If needed, your rule can be more restrictive (e.g., it can contain the source subnet or even the specific hosts, which are allowed to send VRRP packets).

The validation of the control plane for KeepaliveD is based on the default Linux principles: checking the log of the specific daemon. On the Master node you should see that it has entered the MASTER state and are sending gratuitous ARP:

On the BACKIP node you shall see that it is in the appropriate state as well:

In this part you will the see the failover case. First of all, take a look on the topology provided above to remind the state. Here are the original state:

As H1 is active, you will see the virtual IP address 100.65.0.10 at its interface, where keepalived is enabled:

The H2 at this stage doesn’t have the IP address assigned:

In the provided configuration, the virtual IP addresses shares the MAC with the physical IP address of the interface (though it can be modified to use virtual MAC as well).

We run a standard EVPN anycast GW based on the asymmetric routing in our network, so the VLAN connecting both these servers presents on both L1 and L2. As such, you can see the IP and MAC of the virtual IP address from the servers:

So the information seems to be learned and properly installed. Finally we can start our ping test from I1 host to observe the failover:

Now, let’s shut down the enp0s8 interface on H1 to simulate the server outage:

The ping meanwhile continues from I1. For the convergence time it is getting dropped (for 5 seconds in our case) and the continue:

During that time the H2 is going from the backup to master state:

And the network fabric has relearned the new ARP entry for the IP:

So your service continue being provided.

When the primary host is coming back, it will take over the operation again, but this time it will be without any single packet drop.

Messages from H1 during the restoration of cluster:

The system is back to normal operation.

Different Linux distributions have different security configurations. It took as bit to fix the iptables for this lab. One of the reasons is that we were installing the KeepaliveD on a fresh CentOS 8 setup, which doesn’t use iptables by default. Instead, it uses nftables. That’s why we first have enabled the iptables and then implemented the fix.

When you look on any application from the perspective of the end-user, it requires only one thing: make sure that application is properly working during the time the customer user needs that. Being a simple requirement on paper, it may be not easy to implement in reality. Knowing the various approaches, how to use on the network and/or server side, allows you do that and make sure your customers stay with you and bring their friends. Take care and good bye.

Anton KarneliukUncategorizedDecember 24, 2020
Dear friend, This year was unbelievable. But despite all the horrible things related to COVID19 and lockdown, you and we …
END_OF_DOCUMENT_TOKEN_TO_BE_REPLACED

vlog. Episode 2. Discussion about the intent-based networking with Jeff Tantsura

Anton KarneliukVideoJune 3, 2019
Hello my friend, Talking to experts from the telecommunication and IT industry is not an easy task, because you need …
END_OF_DOCUMENT_TOKEN_TO_BE_REPLACED

My highlights on Cisco Live 2019

Anton KarneliukNetworkingFebruary 12, 2019
Hello my friend, Some weeks ago I had a pleasure to attend Cisco Live 2019 in Barcelona (CLEUR). It was …
END_OF_DOCUMENT_TOKEN_TO_BE_REPLACED 7

Anton KarneliukNetworkingSeptember 19, 2017
Hello my friend, Continuing our journey in SDN world we reach the point, where we use external controller to compute …
END_OF_DOCUMENT_TOKEN_TO_BE_REPLACED 4