For a a while we were silent about pyGNMI; however, it doesn’t mean that the project is abandoned. Actually, it is quite opposite: we are very delighted and thankful for the community that we have a number of contributors from the whole world, who is taking part in the pyGNMI project and committing new code. Thanks to the community, a few new features were added as well as a number of bugs fixed. And today we will take a look one of such community-added features, which is called pygnmcli.

Is GNMI a Good Interface for Network Automation?

Yes, it is. GNMI is one of the most recent interfaces created for the management plane, which allows you to manage the network devices (i.e., retrieve configuration and operational data, modify configuration) and collect the streaming or event-driven telemetry. Sounds like one-size-fits-all, isn’t it? On top of that, GNMI supports also different transport channels (i.e., encrypted and non-encrypted), which makes it suitable both for lab testing and for production environment. You may feel that we are biased to gNMI, and you are right. Actually, that is a reason why we created pyGNMI library, Open Source library for network automation with Python and GNMI. 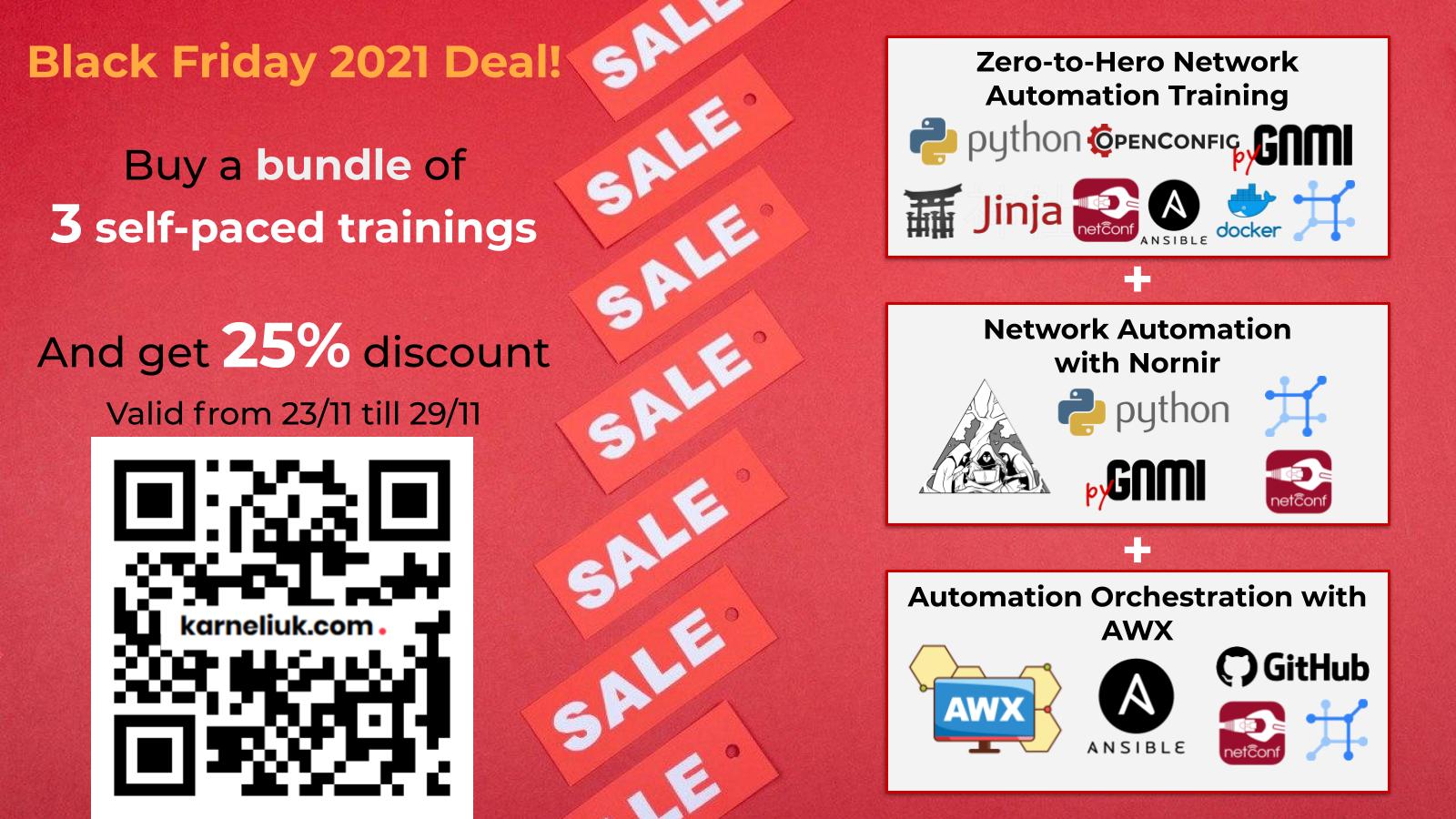 Anton has a very good and structured approach to bootstrap you in the network automation field.

Moreover, we put all mentions technologies in the context of the real use cases, which our team has solved and are solving in various projects in the service providers, enterprise and data centre networks and systems across the Europe and USA. That gives you opportunity to ask questions to understand the solutions in-depts and have discussions about your own projects. And on top of that, each technology is provided with online demos and you are doing the lab afterwards to master your skills. Such a mixture creates a unique learning environment, which all students value so much. Join us and unleash your potential.

To be frank, we on purpose were avoiding creating a CLI version of pygnmi primary for two reasons:

At the same time, we have received a few comments from the network automation community asking for a CLI tool, which would allow them to use pygnmi as a one-stop-shop for interaction with network devices over GNMI. Well, as it appears, that there is a demand for such a tool, then we will provide a supply.

It is a CLI tool for Linux, created in Python. Under the hood, it relies on the very same pygnmi library. In fact, you even don’t have to install it separately: once you install pygnmi, it is already available for you.

The primary purpose of the pygnmicli is to give network engineers, who are transitioning to the network automation field, to get quick exposure to GNMI management protocol, so that they can better understand the power of GNMI.

As pygnmicli for all operations relies on pygnmi, it means that everything, what pygnmi is capable of, is available for you directly in Linux CLI. To be precise, with pygnmicli you can perform:

It also supports both encrypted (using TLS) and un-encrypted (without TLS) gRPC channels. Let’s see how it works.

Join our Network Automation Training to learn the details of GNMI and how to use it.

In this blogpost we continue using the topology, we have used in all other blogposts in pygnmi series:

The functionality of pygnmicli relies on pygnmi. As we have already covered its functionality in separate videos against multiple vendors, we will focus today only on CLI aspect. As such, we will run it only against a single device for a sake of brevity.

At our Zero-To-Hero Network Automation Training you have possibility to create your network automation with GNMI for multiple vendors.

As said beforehand, the pygnmicli is installed automatically, when you install pygnmi via pip:

Once this is done, you can start using it. For example, you could start with built-in help:

Let’s take a look at various practical cases, how you can use pygnmicli.

First of all, let’s check how to connect to the network device, if it doesn’t have TLS setup (i.e., you should use insecure gRPC channel):

In this scenario we you use the following keys:

As you can see, the output is already converted to JSON format for your simplicity to read the output.

The next step is bring the TLS protection to the session. However, at this stage you don’t have FQDN and PKI and, therefore, you would need to override some fields in the certificate:

You can see a few new keys:

If you have DNS properly setup in your network (or you can modify /etc/hosts) on your host, then you don’t need to use override functionality. Alternatively, you use hostname, which shall be the same as in the certificate, in the target field:

Once you have cleared all the connectivity options (i.e, both encrypted and unencrypted gRPC channels), which were demonstrated using Capabilities RPC, it is time now to take a look at other RPCs. Get RPC is the next on our list:

When you do Get RPC, you need to provide also the path, which you are willing to poll information from. To do that, you need a new key:

Case #5. Get RPC with Debug Option

If you are interested in the Protobuf messages, rather than converted data, you can get this data by pygnmicli as well:

Again, there is a dedicated key to get this output:

Besides possibility to collect the information from the network device with pygnmicli, you can also push the new configuration. For example, you want to create a new interface. First, you’d need to create configuration file in a json format:

The information from this file is used in the next call:

Having “UPDATE” in the response is a good sign, by the way. You can see a new key as well:

If you want to test telemetry, this is also possible with pygnmicli. You just need to specify, which type of subscription (poll, stream or once) you want to test and to run the tool with the corresponding operation type:

As you see, there are no new keys, as Subscribe RPC takes the path from the -x argument, which we already have covered above.

If You Prefer Video

Watch out the video demo of the pygnmicli:

You can watch other demos from pygnmi blogs in our YouTube channel.

We are truly inspired by the way how the pygnmi developed over a past few month, where the network automation community played a key role in development of new features and fixing bugs. What we figured out is that in many cases those advancements we driven by needs of individuals and, therefore, implemented. We believe in this approach of natural development, as it is very pragmatic: solving the practical cases and adapting solutions for that serves the individual as well as the community in general.

pyGNMI has taken off the ground and with the help of the network automaton community, which members uses it and contributes to it. We believe that further popularisation of gNMI is inevitable, though we admit that this can be de-routed. However, at the moment it looks like gNMI will be with us for a while and pyGNMI is here for you to make the maximum use of gNMI for your networks. We encourage you to use the GitHub repo to raise requests or your suggestions to keep it development further. Take care and good bye.

Anton KarneliukUncategorizedNovember 6, 2021
Hello my friend, Some time ago we’ve explained how to deploy a 6WING vRouter in a Linux environmennt, such as …
END_OF_DOCUMENT_TOKEN_TO_BE_REPLACED

Anton KarneliukCode EXpress (CEX)February 8, 2020
Hello my friend, I was thinking what the next thing shall be right after you have installed the Python. Initially …
END_OF_DOCUMENT_TOKEN_TO_BE_REPLACED

Tools 6. Where are my packets lost? MTR edition.

Anton KarneliukNetworkingApril 5, 2021
Hello my friend, after show pause we continue our blog series about the most popular network troubleshooting tools, which humankind …
END_OF_DOCUMENT_TOKEN_TO_BE_REPLACED

Anton KarneliukNetworkingNovember 1, 2017
Hello my friend, The next logical step in multicast journey is to enable multicast support in VPN. Whereas there are …
END_OF_DOCUMENT_TOKEN_TO_BE_REPLACED 3